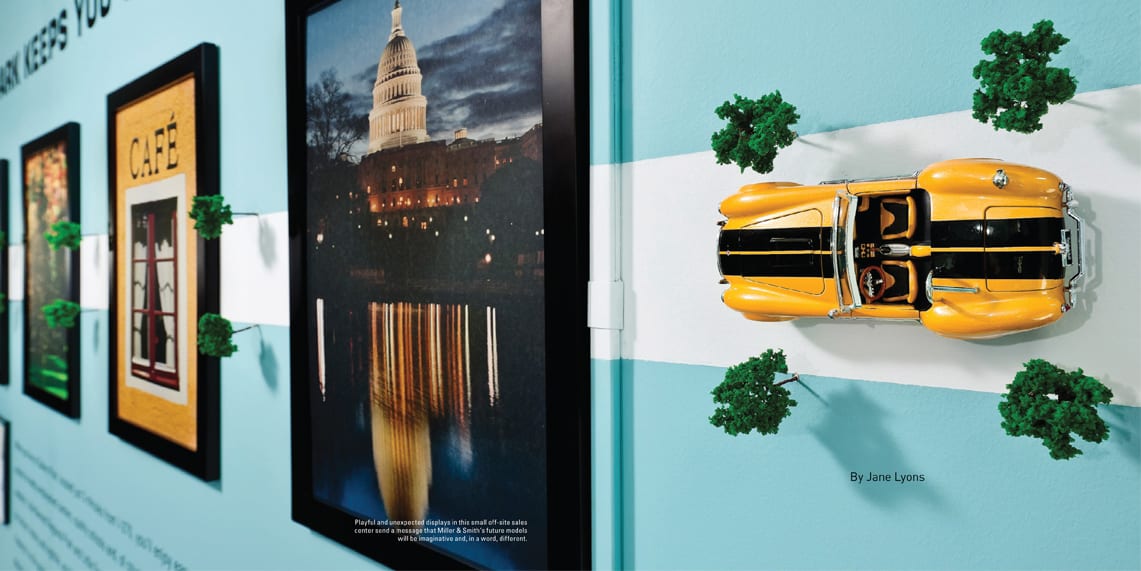 Apple is one of the world's most successful retailers.

It generates a staggering $5,626 per square foot of retail space, nearly twice as much as Tiffany’s and seven times as much as Best Buy. Apple’s iconic glowing logo is like a super-charged beacon drawing nearly 14,000 people into each of its stores every single week. Its flagship store on 5th Avenue is now the most photographed tourist attraction in New York, topping The empire State Building and Statue of Liberty.

Stats like these beg some questions. What can home builders, designers, and interior merchandisers learn from the Apple Store’s success?

What would Apple do if it sold homes and planned communities instead of iPhones and laptops?

This article examines how many of the same basic design principles used by Apple can be applied to creating wildly successful sales centers.

One of the secrets to Apple’s success is that it doesn’t think of its stores as places to sell. Rather, Apple is all about creating an experience and a place where people want to be.

The thinking goes like this. If Apple can create an environment where people want to hang out and experience its unique culture, it’s only a matter of time before they buy.

In designing the sales center for Silo Point, Lyons & Sucher had a similar mindset. Create a place where people want to be, where they can learn at a relaxed pace and experience firsthand what makes the property special.

Silo Point’s story is certainly unique. In 1923, it was among the biggest and fastest grain elevators in America, sending millions of bushels of corn, wheat and beans to ports all over the world.

At the turn of the 21st century, the build-ing had long since retired from the grain distribution game. It was abandoned and crumbling in the Baltimore Harbor until a visionary developer stumbled upon it with an audacious idea: Turn the former grain eleva-tor into a luxury condominium.

To create a sales center that would shape and share Silo Point’s story with the world, Lyons & Sucher transformed an unfinished space on the ground floor of the building.

The space was immense and raw—4,500 square feet with 25-foot ceilings, massive concrete columns and exposed pipes and ductwork. Even for a building embracing a modern, industrial aesthetic, it needed to be softened and made more hospitable. The finished space is divided into a series of smaller galleries designed to encourage casual exploration. Information is presented in manageable bite-sized bits using a mix of tactile, 3-D, interactive, static and video displays.

This is a very Apple-like approach that can be applied to your next sales center design. Rather than hoping people will learn every facet in a single visit, create spaces and displays that encourage exploration and provide reasons to come back.

Unique selling propositions should be woven naturally into the traffic flow, and presented in ways that bring your sales managers into the conversation. At Silo Point, raw structural elements were left exposed. Not only did this celebrate the gritty elegance of the building, it allowed sales managers to demonstrate features and materials prevalent in the lobby and residences. The stenciled concrete columns and historical references peppered throughout became giant cue cards, reminding sales managers of critical points to make and, even better, eliciting questions from prospects.

The overall design of Silo Point’s sales center was as much about creating a vibe as it was a place to learn and buy. Yet, ultimately, the Silo Point sales team agreed that it was the single most effective sales tool they had in their arsenal. As you begin to conceive and design your next sales center, think like Apple and remember that sales come second. Create a place where your prospects (and sales managers) want to be and sales will follow.

One of Apple’s big breakthroughs in the art of selling electronics was painfully obvious in retrospect. Plug the darn things in. Let people touch, swipe, click and actually experience what you want them to buy. A no brainer, right?

Obviously the parallel to selling homes isn’t quite as direct. Even if you have merchandised models, you can’t exactly allow people to live in them for a week or two to get the full experience. What you can do, however, is create a sales center that engages your prospects. You can turn them into active participants rather than mere spectators.

If ever there was a need for customer engagement, it was during pre-construction for Potomac Yard by Pulte Homes. For this mixed-use development in Alexandria, Virginia, Lyons & Sucher was charged with jumpstarting sales from a triple wide trailer in the middle of a construction site, long before the models opened. To help people appreciate the community’s unique selling proposition—an ultra-connected location—Lyons & Sucher created an oversized map featuring a detailed aerial view of the community and surrounding neighborhoods. But rather than hanging it on a wall to be viewed, Lyons & Sucher ratcheted up the engagement factor by placing it on the floor and inviting prospects to walk all over it.

And that’s exactly what happened. Prospects loved being able to discover landmarks and learn about neighboring amenities, from Old Town Alexandria to Washington, D.C., without ever leaving the sales center. The map became a great conversation starter as sales managers helped prospects locate their current home or point out interesting details like home plate at Nationals’ Stadium, the dome of the Capitol, and sailboats navigating the Potomac River.

The next time you’re charged with making a space more engaging and interactive, consider solutions beyond the typical touch screen display. Real engagement starts when your prospects get involved because they’re intrigued or inspired by what your community has to offer and, just as importantly, by the way you present it.

Lots of builders talk about wanting to break out of the “sea of sameness,” but Washington, D.C. area builder, Miller & Smith, walks the walk.

Like Apple, Miller & Smith is known for “thinking different” so whenever it opens a new model or sales center expectations run high.

For its new townhome community in Clarksburg, Maryland, Lyons & Sucher was tasked with creating a pop-up sales center in a small retail space several miles from the community. Using the community’s name, Gallery Park, as a jumping off point for its concept and design, Lyons & Sucher created a space with a chic, yet whimsical art gallery vibe.

One way to think different is to re-imagine what a display can be. In this case, Lyons & Sucher conceived of the displays as informative art installations. What better way to tell a location story than with a classic toy car and dimensional trees growing out of a wall lined with photos of area attractions?

To draw people in and add personality to an other-wise typical rendering prospects see every day, Lyons & Sucher blew it up 10-feet wide and surrounded it with a floating Willy Wonka-sized picture frame.

If you want to attract more traffic and convert more sales, consider the tools and displays in your sales center and remember this. To make a one-of-a-kind impression, don’t immediately jump to off-the-shelf solutions. Create something memorable. Spark a conversation. Surprise, delight and engage your prospects.

Above all, give them reasons to smile and come back and buy. That’s what Apple would do if it were in your shoes.

We happen to specialize in bringing smiles to potential buyers. Reach out to us today and we’ll be happy to discuss some ideas for making your sales center the place to be.